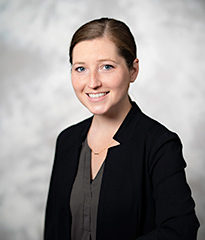 Evi Fuelle serves as Senior Manager, Member Engagement at the Information Technology Industry Council (ITI). In this role, Evi works with senior leadership and staff to identify and execute against opportunities for organizational expansion and growth. Evi is focused on ensuring that ITI delivers value to its existing members, while proactively seeking additional opportunities for engagement with both existing and new members.

Prior to this role, Evi served as Manager for Strategic Initiatives, working closely with ITI's President & CEO to manage the coordination of ITI's broader initiatives within several priority policy areas for the tech sector, including: artificial intelligence, broadband access, and IoT. Previously, Evi served as Special Assistant to the President & CEO, after joining ITI as communications associate in 2015.

Before joining ITI, Evi worked at the Department of Commerce’s International Trade Administration (ITA) as part of the Trade Promotion Coordinating Committee (TPCC). In this role, Evi assisted senior ITA personnel with the coordination of an Administration-wide export strategy (NEI)/NEXT, as well as other export assistance and trade development programs for U.S. companies, including the Doing Business in Africa (DBIA) and Startup Global campaigns. Before joining Commerce, Evi interned at the Trans-Atlantic Business Council (TABC), assisting in the promotion of a barrier-free transatlantic market for European and American companies.

Evi earned her Master’s degree in Political Science with a concentration in the Economic and Social Policies of the European Union, studying at the European University Institute in Fiesole, Italy. Evi graduated with honors from James Madison University with a B.A. in International Affairs.