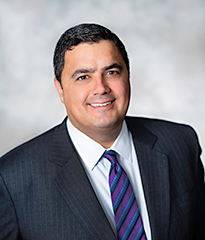 Andy Halataei serves as ITI's executive vice president of government affairs. Andy came to ITI in February of 2011 as director of government relations and he is responsible for handling privacy issues, immigration and cybersecurity for the association. For the previous four years, Halataei was a government affairs consultant at the Stanton Park Group where he tracked and offered direction on legislative and regulatory developments in the areas of telecommunications, intellectual property, health care, immigration and energy.

Before joining Forbes staff, Andy was Senior Legislative Assistant to Oklahoma Congressman Steve Largent where he also specialized in handling Largent’s work before the House Energy and Commerce Committee including health care, the environment, and financial services issues. During his time with Largent he helped to secure passage in the House of the Date Certain Tax Code Replacement Act, legislation that would sunset the internal revenue code. Prior to joining Congressman Largent’s office, Andy was a Legislative Assistant in the office of Representative Gil Gutknecht (R-MN).

Andy received a B.S. in Public Administration and a B.A. in Political Science from James Madison University in 1997. He is a native of Arlington, Virginia and currently resides there as well.